Legoland Malaysia, is very the first Legoland theme park in Asia. It is part of Legoland Resort which also consists of a water park and a Legoland themed hotel. Opened since 2012, it has over 40 interactive rides, shows and attractions. There are also more than 15,000 Lego models throughout the whole resort.

During my trip in Singapore, Miss M and I joined a local tour (WTS) to cross the border over to Nusajaya, Johor. The meeting point was at the Singapore Flyer and the bus departed at around 9am. Legoland Malaysia is actually designed for families with children aged 2-12. But as fans of theme parks, we just had to give this place a visit. 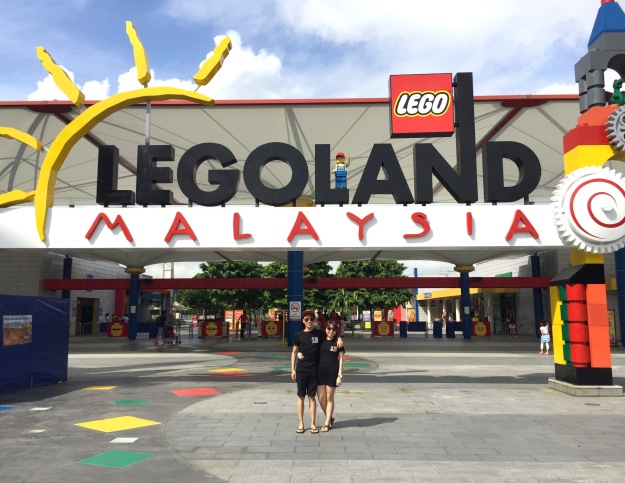 When we arrived, the very first thing we did was to look for food! It was already 11am by then and our stomachs were grumbling. There were several restaurants in the park and we decided to go to their Market Restaurant where they serve asian and western food.

We had their chicken briyani and it was actually really good. Miss M liked the chicken curry so much that we went to ask for more. We both shared one combo meal which included a drink and a fruit dessert.

After lunch, we headed to the middle of the park where they have an amazing display of miniature landmarks from all over the world – Miniland. There are 18 separate sections displaying famous landmarks from Countries such as China, India, Singapore, India, Thailand and many more. I was pretty mesmerized with the detail and precision put into creating these structures. Here are photos of some of the amazing miniature buildings caught using my iPhone 6!

There are so many more buildings at Miniland and if I posted each and every one of them my blog post would be extremely long!

So after Miniland we roamed around the park and took various child-friendly rides. We went to Legoland on a weekday and it was not during holiday season. So the park was relatively empty – good for us!

The park itself is actually pretty small. Even after taking most of the rides, we realized that we’ve explored the entire park in less than two hours. At 1pm, we headed to the city stage to watch their Ninjago live performance.

We had totally no idea what was in store for us. I thought that it would be a show made to cater for kids, but I was wrong! I was very entertained throughout the whole show.

The concept of the show goes like this – there are ‘ninjas’ in the background that controls the movement of the Ninjago characters as well as other props. They were so incredibly accurate with every movement of the figures, even with body reflex movements that we don’t realise we do. It was such a joy watching every scene come together.

I’ve seen many shows at other theme parks, but I would say this was one of the most entertaining shows I’ve watched. Kudos Legoland!

With lots of time on our hands, we headed over to Lego Mindstorms to check out some of the indoor activities they have to offer.

They had two workshops which runs almost every hour. One of the workshop was sort of like a fortress battle theme and another was surgery themed. We had signed up for both programs back to back. In both workshops, we learnt to program a robot wirelessly to do certain tasks using a Mindstorm NXT device. We could program the exact movements of the robot as well as instructing it to make sounds.

At first we found it pretty challenging but after a while we got the hang of it. It was really fun to see the robots get into action! We breezed through the second workshop in less than 30 minutes.

Most of the other participants were kids and parents. I thought that this was a really fun and interactive way to introduce the world of programming to young children.

After the workshop, we were walking around and we crossed paths with the one and only Darth Vader!

Before exiting the park, we entered ‘The Big Shop’ which was located right next to the main entrance to see if there are any souvenirs to buy. In the end, we both created a customised lego keychain with our names engraved on it! A really neat souvenir to take home along with all the memories in this park.

So that concludes our day at Legoland! Overall, we really enjoyed ourselves. It was fun to see the variety of lego structures and models built in the park. Their rides and activities were fun and engaging. The whole park was also clean and comfortable.

Despite peoples comments of the park being too small, there were actually enough things to do for one day, even for young adults. I can easily recommend any parent to bring their child to Legoland. It is a fantastic place to have fun as well as to learn.