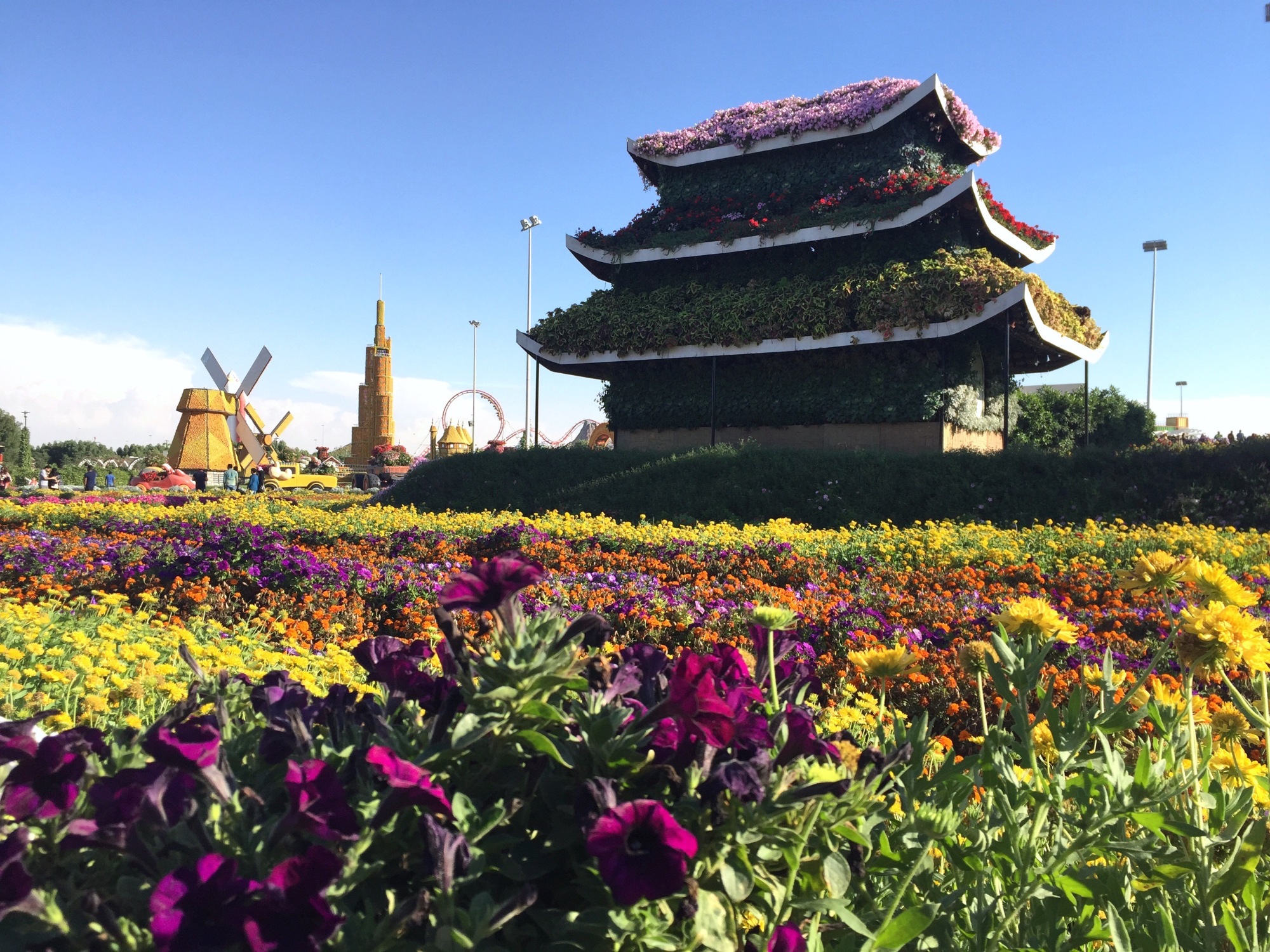 Dubai Miracle Garden, is the world’s largest natural flower garden. Spreading over a span of 72,000 square metres, it is filled with over 100 million flowers throughout the entire garden. Opened since Valentines Day 2013, the garden has managed to captivate the hearts of many couples as well as families from all around the world.

The Miracle Garden is located in Dubailand and it attracts 55,000 visitors every week. Bursting with vibrant displays, they have created all kinds of sculptures that blooms with flowers – landmarks, houses, hearts, animals, you name it.

During my trip in Dubai, I was looking through the ‘Things to do in Dubai’ page on Tripadvisor and I came across this place. The garden was not advertised as much or talked among many people unlike places like the Burj Khalifa and Burj al Arab, but it definitely caught my attention.

So off we went to bus station! According to the bus schedule, the frequency is approximately 20 minutes. However, we waited for about 45 minutes and the bus finally came. We found out that the bus was having maintenance issues and it was stalled for another 10 minutes. Feeling frustrated, we did not want to waste anymore time and we took a cab to the garden.

At last, we finally arrived.

Entry into the garden costs 30AED. We promptly bought tickets and entered the garden with excitement.

My immediate impression of this place was – wow, this is incredible. There were literally flowers everywhere!

But the first thing we did was to look for food. We were slightly hungry and looked for something to nibble. There was a food stall nearby the entrance that sells snacks such as nuts and mini pancakes. After having happy belly, we started to roam around the garden.

The flowers are maintained using waste-water through a drip irrigation method. In particular, they use 200,000 gallons of water per day to water all the flowers. There are also more than 45 species of flowers that is acquired from all around the world.

Due to changing seasons, the park only opens from October to April and closes during June to September due to high temperatures of more than 40 degrees celcius.

Throughout the park, there were many recreational areas for visitors to simply relax and just enjoy the scenery. They thoughtfully provide shelters to keep us cool from the scorching desert heat.

Food stalls were also plentiful. There were heaps of food stalls at the middle and the back section of the park – indian food, egyptian food, lebanese food, pizza, etc. After burning our energy from walking through the park, our tummies were grumbling again and we went to buy a bowl of briyani. Unfortunately it was a pre-packed briyani that was simply heated in the microwave. But it still tasted good nevertheless.

As we continued to explore, we came across a section of the garden with flower houses!

After spending more than two hours in this garden, the sun was starting to set and it was time to go home. This place is probably a haven for many couples but it can be enjoyed by anyone really. It’s amazing place to soak in the romance as well as the serenity of the surroundings. We had a great time roaming around the garden.

The entire park was clean and very well maintained. With their huge range of impressive flower sculptures, Dubai Miracle Garden is an fantastic place to spend quality time and take amazing photos with your loved ones.

If you happen to visit Dubai, don’t forget to make time to visit this gem!

One thought on “Miracle Garden, Dubai”