Babe, is the newest addition to KL’s growing dining scene. Michelin starred chef Jeff Ramsey brought along his Japanese-influenced tapas concept, or ‘Japas’ as he calls it, all the way from Japan. Previously, he was the head chef at Tapas Molecular Bar in Mandarin Oriental Hotel, Tokyo, an establishment that has earned itself one Michelin star.

When I first heard of this opening, I was so intrigued with the idea of a progressive 16 course Japas menu. Knowing that the dishes were created with the concept of molecular gastronomy made me even more excited. I just had to give it a try!

The restaurant is located at one of the the higher floors of Clearwater Residence at Bukit Damansara. Guests are allowed to park at their basement car park upon arrival. A friendly security guard further assisted us with the lift to proceed to the restaurant.

Upon entering, the interior of the restaurant felt classy and comfortable at the same time. The restaurant is split into two sections, indoor and outdoor. The indoor section had an elegant atmosphere whereas the outdoor dining area had a spectacular view overlooking the KLCC Twin Towers. We chose to dine inside 🙂

Currently, Babe offers a single ‘omakase’ style menu that comprises of at least 15 dishes for Rm300. Dishes served will completely be in the hands of the chef. They will simply serve the best they have to offer. There is also an option to upgrade the main course to Wagyu beef for an additional RM100. We opted for the former option.

As we sat down, we were presented with their brand new Cutipol cutlery shipped all the way from Portugal. It was a huge upgrade from what they previously used – wooden chopsticks. It was such a joy to use them throughout the meal. Holding them felt expensive due to it’s weight and beautiful design.

The waiter then kindly explained the concept of their restaurant where small dishes will progressively be served and that the dishes will get more substantial towards the end. He also asked if we had any dietary restrictions and Miss M mentioned that she did not like wasabi (omg who doesn’t like wasabi!).

To start off the meal, the waiter brought us their Japanese version of a Clam Chowder. It was topped with coconut slices smoked with bacon and right at the bottom of the glass, there’s a thin layer of delicious onion marmalade.

This is definitely not your ordinary clam chowder. It’s texture was like a crossover between creamy and foamy which was very refreshing. Hidden within this glass was also a huge spherical ball! When exploded, I could immediately feel rush of fresh clams onto my taste buds. Great start.

Next, we were presented with two dishes – their version of ‘curry buns’ along with freshly shucked smoked oysters.

Placed on a bed of spices are two mini ‘buns’ which are actually made of meringues. The buns are filled with panko, Japanese style breadcrumbs that are normally used as a coating for tonkatsu.

Alongside we have smoked oysters topped with yuzu, sour cream and onion. The combination of flavors were simply clean and beautiful. Very refreshing! 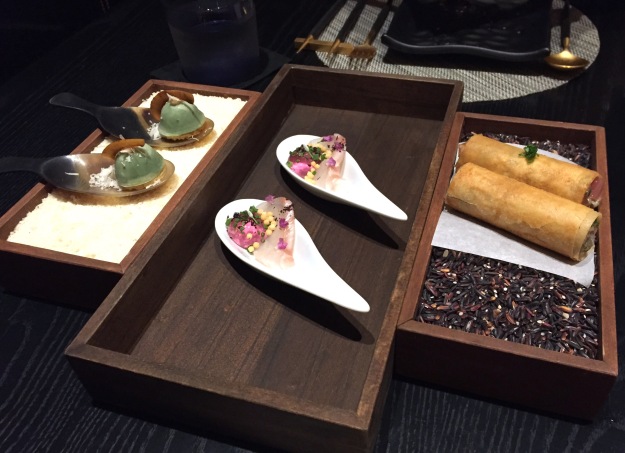 Next, the waiter brought us our second round of appetisers. A trio of beautifully presented bites in more wooden boxes filled with grains of rice.

Right in the middle is an interpretation of a dish called Tai Chazuke. Chazuke, or ochazuke is a traditional Japanese dish made by pouring green tea or dashi over cooked rice, usually with savoury toppings. Chef Jeff Ramsey tore apart the original dish and re-created so that it can be enjoyed in one single bite. Mind. Blown.

The result is a combination of ingredients that is so aesthetically pleasing to the eyes. It includes a slice of delicate seabream, rice puffs and a spherical ball encapsulating shiso tea. Having this in one bite, everything just comes together as the sphere bursts into your mouth. One of my favourites of the night.

As for this one, it’s basically a spring roll stuffed with salmon, tuna and yellowtail.

Here comes another deconstructed dish. They tore apart all elements of a Caesar salad, changed the medium for some of the elements and put them back together to form a single bite. The star ingredient was the romaine lettuce where it was changed into the form of a frozen capsule. Alongside, you get all the typical ingredients of a salad such as croutons and Parmesan cheese.

6 courses in, our waiter brought us another 3 unique plates for us to taste.

The star of this round is their cypress smoked yellowtail nigiri. The waiter brought it in a dim sum box with the lid on. He then unleashed that incredible cypress aroma upon placing it on the table. The aroma was really strong but pleasant at the same time. The waiter then advised us to eat the nigiri upside down and place it onto our tongue in order to get the optimum flavour of that amazing smoked yellowtail.

For this one, the chef prepared for us beautiful slices of striped jack as well as seaweed topped with sesame powder. It was important to incorporate all the ingredients on the plate onto one bite as it brings harmonious flavours onto our palate. The saltiness of the seaweed really shined through and brought out the gentle flavours of the striped jack.

Nikujaga is a common Japanese dish that is made from meat, potatoes and onion stewed in sweetened soy sauce. This dish can actually be found in most Japanese restaurants. So this time they deconstructed the entire dish again and came up with an alternative representation of Nikujaga. In a form a pastry puff, it is filled with potato foam and on the outside it is wrapped with wagyu beef.

This was the last of our appetizers, now onto the main courses!

The waiter brought us this dish and he explained that the soft shell crab was sliced by a ‘samurai’. Thus, we can see the oozing guts which is essentially coriander vinaigrette and turmeric mayo. The ‘slicing’ action can also be seen on the plate where they have printed it with edible charcoal mayo ink. The ink can be wiped off the plate so we had lots of fun playing around with this dish 😛

Babe really went all out on this one. It was really playful and fun. Another highlight of the night.

To accompany the soft shell crab, they also served us a wonderful bowl of rice topped with salmon roe. Simple and really really delicious. I swear could just eat a whole bowl of this just for one meal.

I was so ecstatic when this dish came to the table. I wasn’t expecting this at all because they removed it from their latest menu. Then again, their menu is always ever changing so I was really pleasantly surprised! Placed on a Japanese charcoal ‘stove’ are kombu buttered alaskan king crab legs. With a touch of lime, I just closed my eyes after every bite to savour the incredible flavours of the crab. Absolutely delicious.

For our final main course, the chef had an idea of a ‘virtual’ truffle steak, where guests had to sniff a tissue that was scented with truffle oil before having a bite of the steak. Having the separation of two of our sensory – smell and taste, and trying to combine them didn’t really work for me. Nevertheless, it was still fun to try it out 🙂

After a long journey of savoury courses, we’re finally moving onto the dessert section of the night.

But, before that, the waiter brought us an interlude course to lighten up the mood and getting guests to having more fun than they could imagine for a meal.

The waiter demonstrated how we should eat what they call ‘nitro puffs’. He suggested to poke holes into this meringue like pastry, dip it in liquid nitrogen for 8 seconds, pop it into your mouth, and breathe out like a dragon.

In the meanwhile..  I’ve secretly requested for a surprise for our anniversary. The waiter brought out a blank card and started pouring liquid nitrogen onto it, to our surprise, words started to appear!

Alongside they also brought a complimentary celebratory dessert plate. I know 17 months may sound extreme as a celebration, but we’re in a long distance relationship you see. So we take the opportunity to celebrate whenever we can 🙂

To end the lovely evening, as with most fine dining restaurants do, they brought out a plate of petit fours.

Their team presented us with a strawberry ‘blanket’, a milk-scented paper, popping candy chocolate bars and a miso butterscotch candy with edible wrappers.

That’s 17 dishes including the additional surprise dish as well as the nitro puffs. Throughout the entire night, every single dish was playful and fun. Babe has really outdone themselves and all of their dishes really shined through.

Towards the end of the night, Chef Jeff Ramsey came into the dining room to greet his guests. He approached us and offered to take a photo of us. I thanked him and continued to have a casual conversation with him. He mentioned that his restaurant will temporarily be closed for a month or so later in the year in order to make some changes to the restaurant. During this time, he said that he might open a pop-up somewhere downtown.

He also mentioned his future plans for the restaurant. He wants to deviate from the current style of the menu to a more structured menu where there will be more substantial main courses but also adding small japas dishes in between.

After our conversation, I took this opportunity to grab a photo with him 🙂

Overall we had such an amazing experience. Miss M said this was one of her top two memorable experience that she’s had so far.

They weren’t kidding when they emphasised that they were all about ‘fun’ dining. My perception towards food has changed once again. Just imagine all the other possibilities that we can do with food!

I’m glad that chefs around the world are starting to see Malaysia as a great opportunity to tap into as there’s a huge gap in what the world has to offer in the dining scene compared to what Malaysia currently have.

I’m so excited for what’s to come!