Corner House, helmed by Chef Jason Tan delivers a concept called Gastro-Botanica. It represents a contemporary cuisine that emphasises on refinement and quality whilst providing the perfect balance  between protein and botanical elements on a plate.

Chef Jason is known as the suitcase chef. He travels around the world to collect ideas and to find inspiration for his cuisine. Previously, he has worked in highly established restaurants in Singapore such as Les Amis and Sky on 57.

Corner House has been rising in popularity in Singapore’s food scene, making it’s mark among the fine dining titans by winning several awards. Just recently, Corner House has been awarded one Michelin star upon the launch of Michelin’s 2016 Food Guide in Singapore. Furthermore, it is ranked number 17 on Asia’s 50 Best Restaurants 2016. A great achievement!

Located right in the middle of Botanical Gardens, Corner House serves a Business Luncheon menu priced at S$58++ for 3 Courses and  S$68++ for 4 courses. Extremely affordable if you ask me! It’s the perfect way to sample what Corner House has to offer without breaking the bank.

However, once you’re satisfied with their lunch, you will be tempted to try out their Discovery Menu, where Chef Jason will curate the best 8 course meal you will ever have for S$258++. But for this review, Miss M and I went for their 4 course Business Luncheon 🙂

We arrived on a sunny Tuesday afternoon (It was actually on Singapore’s National Day). Diners will have to park in Botanical Garden’s designated parking area and take a short stroll to get to the restaurant.

Once there, you will see a beautiful two-storey black & white bungalow that looks like it has lot of history behind it. In fact, is has! It was built in 1910 where a botanist, E J H Corner, have lived in for many years. Ever since, many of the original architecture still remained in tact.

There are four sections of in the restaurant. There is a waiting area called the Reading Corner and three dining areas called Claret Corner, Whispering Corner and The Verandah.

As we arrived, we were seated in the main indoor dining area situated on the second floor of the restaurant. Upon seating, we saw that there was a spot at the verandah area we asked if we could sit there instead. Lucky us, the waiter allowed us to make the change. It was much better since the verandah has a view that overlooks the garden. Plus, it was also brighter! Perfect for taking photos 🙂 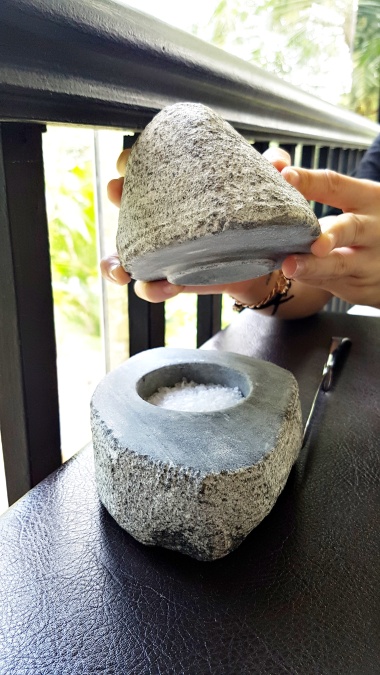 We noticed there was a large rock on the table that could be opened. We were both curious and we found that there was salt inside! A unique way to store salt. It was surprisingly heavy to lift the top of the rock. Miss M had to use both her hands 😛

On the Business Luncheon Menu, there are several options to choose from. However, we only had to select our main and dessert as both the foie gras and scallop starter was included for the 4 course menu. Trust me, that extra 10$ is absolutely worth it.

After ordering, they served us two pieces of bread from their bread basket. Amazingly fresh and crispy!

Usually starters are served as small portions, but this dish was really satisfying. The combination of every single ingredient truly complemented each other. The delicate flavours of the scallops combined with the marinated roe coupled with the crunch from the fennel was just incredible. Through every bite, the words ‘oh my god, this is so good’ kept repeating in my head. Miss M also highly praised this dish.

For the second starter, they served foie gras along with Spanish ham, citrus, endive and honey mustard. First of all, the presentation was absolutely on point. They really did not hold back even if it’s their starter courses!

Usually foie gras is eaten as a spread due to its strong taste, so this was our first time eating foie gras as a huge chunk. Of course, we have other ingredients to complement the duck liver. This dish was seriously out of this world and it truly helped me understand how amazing foie gras is.

Not everyone can handle the taste of foie gras when eaten just by itself, but with each of the paired ingredients, your taste buds will be challenged in the most amazing way. Just this dish alone will provide you with many different tastes and textures that may sound odd, but makes perfect sense. Citrus with foie gras? Who would’ve thought! Incredible.

By this point was already in such awe. I was so satisfied that I could just stop here after experiencing two incredible life changing dishes 😛

But let’s proceed with our mains!

Their Patagonian Toothfish really caught my attention mainly because of it’s unique name. It is a unique species of cod and it sounded like it would be a very interesting dish. The fish itself was surprisingly really soft. Since the fish has layers, you could easily eat it with just a fork. The accompanying elements such as the cauliflower, harissa, butternut squash and ikura roe went really well with the fish.

As for Miss M’s Hungarian pork, I’ve only tried one bite and it was really soft. You could also taste the incorporated flavour of the corn.

Miss M prefers her dish over mine, and I prefer mine over hers, which is something that happens quite frequently. But it’s a good thing! 😛

Right before our dessert, the waiter asked if we wanted coffee or tea to be served with the dessert. 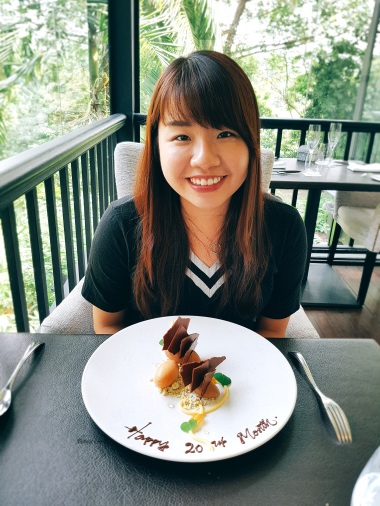 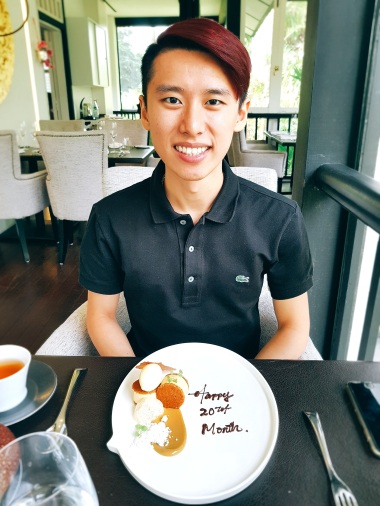 My Interpretation of Kaya Toast is regarded as Corner House’s signature dish. It’s beautiful presentation and its relevance to our culture makes it special and very relatable.

Chef Jason deconstructed the traditional kaya toast and elevated every single ingredient to produce a modern take of the kaya toast.

We have the basic ingredients such as pandan and coconut, but also with the addition of gula melaka, muscovado sablé (biscuit crisp) and pineapple.

As for the Earl Grey Dessert, the chocolates was infused with earl grey. The creation of the earl grey chocolate using 40% Jivara and 70% Guanaja provided a complexity of sweet and bitterness that will definitely impress any earl grey fan.

On top of that, there is also yuzu, pistachio and kumquat to go with the earl grey chocolate. Lovely 🙂

Phew! What a journey. I can’t believe that this was only 4 courses. I can’t imagine going through their 8 course menu. There was so much going on throughout every single dish with unique ingredients and elements. I was seriously impressed by the end. Chef Jason and the team really knows how to put on a show.

S$68+ for a meal in Corner House is an absolute steal. You just can’t miss this one. I can highly recommend you to try any of their menu as I believe that every single dish they produce will be amazing. If you have more money in your pocket to splurge, go for their other menu offerings. Believe me, it will be worth it.